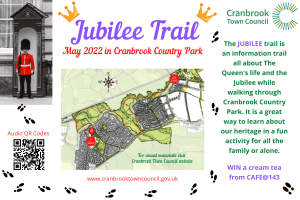 For any hearing impairment please down load the following audio script:

We would like your walk through the country park as relaxing as possible. Please take note of all you see but we would like to remind visitors that all living plants and wildlife should remain within the park. All litter can be placed in the bins around the park and should you see litter, feel free to help the wildlife by cleaning up for them. Please take the time to study the map and be aware that there are no toilet facilities within the park. The Jubilee route should take an hour to complete but can be completed at any time. For those who need visual materials please visit www.cranbrooktowncouncil.gov.uk/Communitydevelopment. Lastly, should you see anything which makes you feel uncomfortable please report this to Cranbrook Town Council. Please walk towards the Country Park.